Nonprofit marketing has always been of interest to me, because it's a unique extension of traditional marketing goals. Rather than customers, we seek donors. Rather than profits, we measure positive impacts made. As social media has taken the marketing world by storm, savvy non profits have wasted no time leveraging the power of digital connections to tell their stories. UNICEF is a great example of a major nonprofit utilizing social media, and specifically Facebook, to make personal connections to drive donations, awareness, and participation.

With that in mind, it's worth taking a peek into the world of UNICEF's Facebook page to see what theyr'e doing well, and how you can emulate their success on your nonprofit's social networks.

Before we dive into their Facebook page, let's look at a quick snapshot of UNICEF's current standing (information via GuideStar):

Now that we have a little background, let's get a closer look at how UNICEF is utilizing the world's largest social network as a channel to communicate and drive change. 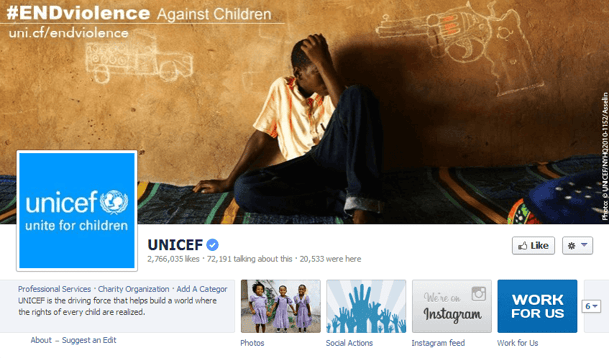 Facebook is the first social network linked on UNICEF's website homepage, and also constitutes the vast majority of their social reach with over 2.7 million likes.

While we could attribute their high like count to basic brand recognition, such a statement would overlook the incredibly well implemented strategy the organization is exemplifying on their page. Among other facets, the UNICEF page abides by (and expands on) standard Inbound best practices to earn not only likes, but high engagement on Facebook:

Inbound Marketing for Saas Companies: Who's Doing It Right?

One of my favorite aspects of Inbound Marketing is it's inherent versatility: every company molds the process and tests the ...
Start Reading
Joanna Swartwood, Director of Marketing and Revenue Growth Wed, Aug 7, 2013 9 min read

The 6 Principles of Influence & How They Fit Into Marketing

I just finished reading (OK, listening to) Robert Cialdini's Influence: The Psychology of Persuasion. It was recommended by my ...
Start Reading
Joanna Swartwood, Director of Marketing and Revenue Growth Tue, Oct 22, 2013 9 min read

eCommerce Key Terms: The Vocab You Need to Know