5 Misconceptions People Have about Email Marketing 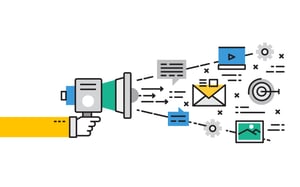 Email marketing is one of the oldest online tools that inbound marketers use to reach out to leads, prospects, and customers today. Billions of brands send emails. But for some reason, it still gets a bad rap, even though it’s a popular and effective strategy that’s low cost and easy to maintain.

Some marketers won’t send emails because they believe that sending them is equivalent to sending out spam. They think about all the spam that appears in their own inboxes, which they delete almost immediately, and think there’s no way that their own emails would get opened, let alone read by their recipients.

But email actually has a marketing ROI of 4,300%. Yep, that’s right—we didn’t accidentally add in extra zeros there. With 77% of consumers preferring email for marketing communications, it’s clear that email marketing isn’t just spam—consumers want these messages and these messages work.

There are constantly new inbound marketing strategies coming into the market and being hailed as the most effective technique to use. Though email marketing has been around for a long time, as one of the first-ever used inbound marketing strategies, it doesn’t mean that it’s dead and ineffective just because new and shiny strategies have come to light. It’s tried and true and it’s still widely used in the business world. In fact, 4.3 billion email accounts send 196 billion emails every single day. And 91% of consumers still check their email on a daily basis.

Companies that leverage email marketing can still effectively nurture leads, educate prospects, build trust and loyalty, and convert customers. Email allows them to target their audiences directly, lets them be highly personal, and lets them do so on a channel all their own.

Email is typically seen as a nurturing tool that is used after leads are already generated. But that doesn’t mean that it can’t be used to generate new leads. Emails are shared heavily—recipients forward email messages to their friends, families, and colleagues—people who aren’t on your email list. When you add a lead generating CTA to your emails, and these emails are shared, then you have a great opportunity to generate a new lead through your messaging.

4. Consumers Already Get Way Too Many Emails

One of the most commonly heard misconceptions about email is that consumers already get way too many messages in their inboxes, and they don’t want any more. But the truth is the majority—60%—of people actually receive fewer than six emails per day from brands. And out of that majority, 40% receive fewer than three emails a day.

5. My Emails Will Just Go to Spam Anyway, so What’s the Point?

If you think of your emails as spam (myth #1), then you probably also think that they’ll end up in your recipients’ spam folders. So what’s the point of sending them? But the truth is less than 0.05% of people (1 person out of 2000 emails) hit the spam button.

As long as you avoid email marketing mistakes and send out useful, informative, relevant, and educational content, it’s unlikely that your messages will end up in the spam folder because your recipients will value them.

Let’s put these five misconceptions to bed right now. Email is an effective marketing tactic, even today. And there are plenty of statistics to prove it. So go on, send those emails. You’ll be glad you did.

What to Do If Your Email Marketing Isn’t Working

It doesn’t seem that long ago when email marketing was a sure-fire way to reach customers via the internet. However, between ...
Start Reading