Net Neutrality Has Been Repealed. What This Means for You 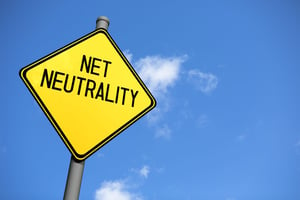 The death of net neutrality means the death of the open, free internet. What happens next, and what does this mean for you?

How Consumers and Businesses Are Affected

The repeal of net neutrality is bad for consumers and businesses alike—it’s harmful to all internet users and creators. When the internet is no longer a space of equal opportunity, big companies can undermine smaller startups who can’t pay to access faster internet lanes and reach consumers.

Consumers will have restricted access to the internet and will likely have to pay more to surf sites at better speeds. And the money spent on higher fees will go straight to giant telecom companies.

Left unchallenged, the repeal of net neutrality will affect internet users worldwide, including those here in Canada. Many of the sites we frequent are American, and if any of those online services can’t afford to pay to stay in the internet fast line, they could eventually become irrelevant. Canadian companies will also likely have to pay fees to stay out of the slow lane and reach U.S. users.

The Effects Won’t Be Immediate

It’s important to note the effects of this legislation won’t be felt right away. The FCC will spend a few weeks making final adjustments to the rules. These new rules then need to be entered into the federal register, which likely won’t happen for a couple more months.

Once this is done, ISPs will be able to define restrictions for how we access and use the internet (scary, right?). Under the new rules, ISPs can block and prioritize whatever content they wish—as long as they publicly announce that they’re doing it.

Net neutrality won’t go out without a fight. When the rules get entered into the federal register, we can expect a large number of lawsuits and challenges to be filed. The FCC’s case for net neutrality rests on a deeply incorrect representation of how the internet works.

The main problem is the FCC’s definition of broadband. It claims ISPs are able to “generate and make available information online.” But in reality, ISPs’ main purpose is to transmit data, not generate it. Broadband should thus be classified as a telecommunications service, not an information service. This is important since these two services are regulated differently —the FCC has greater power over telecommunication services.

The FCC rejects the fundamental idea of how the internet works and aims to reclassify broadband. Since these new rules are wrongly justified, the FCC could be challenged under the Administrative Procedure Act, which prohibits regulations that are “arbitrary and capricious.”

Don’t Accept the Fate of a Restricted Internet

Fortunately, 83 percent of Americans support net neutrality, according to a recent survey. Large content providers like Google, Netflix, and Amazon, as well as startups and tech firms, are also against the FCC repeal.

Congress has already started receiving bills to backtrack the repeal of net neutrality, and advocates will keep challenging the court’s decision. But we still need to put pressure on the decision makers to change net neutrality’s fate.

We don’t know how long it will take to fight the repeal in the courts, but you can make your voice heard in a number of ways. For example, you can join the OpenMedia campaign or the Free Press action fund rallying internet users worldwide to help save net neutrality.

A Quick Start Guide To What’s New In Website Optimization

Digital Marketing Is Changing At Breakneck Speed; Don’t Be Left Behind If your website is more than 24 months old and you ...
Start Reading
Mike Lieberman, CEO and Chief Revenue Scientist Fri, Nov 24, 2017 5 min read

5 Implications of Net Neutrality Rules If This Gets Passed

In all its chaos and complexities, we love the open and free internet. And it’s safe to assume most people feel the same.
Start Reading
Mike Lieberman, CEO and Chief Revenue Scientist Fri, May 11, 2018 4 min read

If You Still Want to Be in Business 5 Years from Now, Here’s What You Need to Do

Change isn’t always easy, but it’s definitely necessary. Businesses have to adapt and implement new methods to keep up with ...
Start Reading